The presence of broadleaf weeds not only reduces the aesthetic quality of the turf, but more importantly, they compete with the desired turfgrass for water, nutrients, and sunlight. Failure to control these weeds often results in a deterioration of the turfgrass stand over time.  Broadleaf weed infestations are often symptomatic of a more basic cultural or soil problem in many cases, such as pH imbalances or compact soils in need of core aeration.  If these problems persist, weeds will be a continuous problem. Therefore, a sound weed management strategy not only includes removal of existing weeds, but also using corrective management measures for the factors causing poor quality turfgrass.

The numbers and types of broadleaf weeds found in turfgrass are greatly influenced by management and cultural practices.  For example, close mowing and too little nitrogen favor white clover.  Close mowing also favors weeds such as carpetweed, spurge, plantains, and dandelion. Poorly drained areas favor weeds such as ground ivy, while compacted sites favor knotweed and plantains.  Correcting improper management practices to maintain a dense, vigorous turf is the best and most lasting method for broadleaf weed control. Of particular importance are proper fertilization, mowing, and watering.  Several broadleaf weed species cannot be satisfactorily controlled with proper use of herbicides alone, further increasing the importance of proper cultural management to reduce the opportunity for their establishment and spread.

**Herbicides should be considered an aid, but not a complete cure, for broadleaf weed problems in landscaped turf. 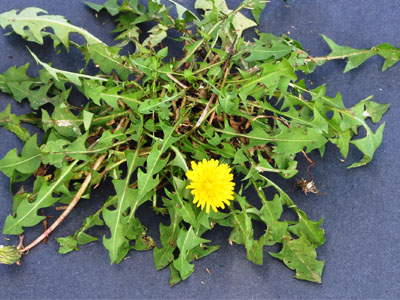 Dandelion is a winter perennial. The dandelion has a thick fleshy taproot which often branches. New plants come from the root and root segments. Leaves form in a rosette, are deeply lobed, with the lobes pointing toward the base. Both the leaves and flower stems contain a white milky fluid. The flowers are yellow and are individual stems. The seeds are brown with the tip containing white hairs. The yellow flower will turn to a white globular puffball. The seeds are disseminated by wind and regular mowing. Dandelions spread by both seed and stems from the root.

Common Chickweed is a shallow fibrous rooted winter annual which usually grows in moist shaded areas.  The leaves are small, smooth, pointed at the tip and elliptic in shape.  They are opposite on branching creeping stems, which root at the nodes.  Chickweed adapts well to different mowing heights.  The flowers of common chickweed are white, small star like with five notched petals.  It is spread by seed. 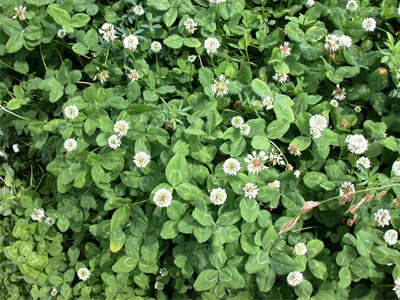 White clover, found throughout the United States, is a shallow rooted winter perennial legume which spreads by stolons or above ground runners. The plant takes root from the stolons at nodes along the stems when they come in contact with the soil. The white clover plant has compound leaves divided into three leaflets which are all joined at a central point and originate at the nodes along the stems.  Leaves may contain a white ‘watermark’. White clover is adapted to many soils but tends to grow best in soils that are moist and low in nitrogen.  White clover flowers from May through September. 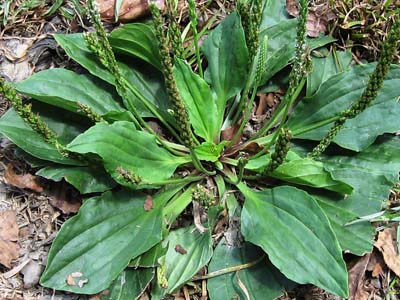 Broadleaf Plantain is a shallow, mostly fibrous rooted perennial.  The leaves, which develop in a rosette, are large oval shaped with predominant veins.  Broadleaf Plantain is similar to several other plantain species, but does not have the purple color at the petiole of the leaves.  The main growth period for broadleaf plantain is from June through September.  The seed head is described as a rat-tail like seed head with flowers along the upper half.  Broadleaf Plantain spreads by both seed and shoots from the roots and can be found throughout the United States.

Spotted Spurge is a summer annual.  While similar to prostrate spurge, there are subtle differences in the 2 varieties.  Spotted spurge has a more erect growth habit than prostrate spurge.  Leaves are small and oblong shaped with an irregular red to purple spot.  Leaves on the spotted variety are slightly larger.  Leaves grow opposite on the stem, spotted spurge has fewer leaves per stem.  Both varieties contain a milky sap in the stem of the plant.  It germinates mid spring and flowers from June thru September.